Since the start of the prevention and control of pneumonia epidemic caused by COVID-19, the CPC Committee of BSU studied and implemented the spirit contained in the important instructions given by General Secretary Xi Jinping in the first place. It regarded the prevention and control of COVID-19epidemic as the top priority by implementing the disposition made by the General Administration of Sport of China, Ministry of Education and the CPC Committee and government of Beijing municipality at a high political position. It carried out joint prevention and control by coordinating the online and offline efforts in a prudent, careful, scientific and reasonable way, thus building a network of the whole school to fight the epidemic.

On January 26, the prevention and control of the epidemic at BSU was launched in an all-round way. We implemented strict measurement of body temperature and information registration management at the school gate first. According to the arrangement made by Beijing, we released two notices about the postponement of school-opening and also the postponement of examinations for art categories and enrollment of doctoral students in the first place; and we conveyed the information to each teacher and student through official WeChat account, website and other online channels. We formally started the usage of observation place for quarantine first set up in Changping, providing the quarantine service for relevant personnel of the General Administration of Sport of China making preparations for the Olympic Games and the teachers and students returning to Beijing from other places. According to the general requirements of "spotting, reporting, putting in quarantine and treating” at an early stage, we carried out careful classified checking for all the students and faculty members of our university, especially paying attention to those teachers and students from Wuhan or Hubei Province leaving Beijing during the winter holidays. We set up “one flowing record for one person” for those leaving Beijing to update the information each day according to the system of "zero report", monitoring the health status of the teachers and students in an all-round way. All the medical workers of the school hospital were engaged in the prevention and control of the epidemic. The logistics department was responsible for hygienic work and stocking supplies.

Stressing on the word of “strictness”---rigorous organizing, prudent planning and strict measures taken for prevention and control 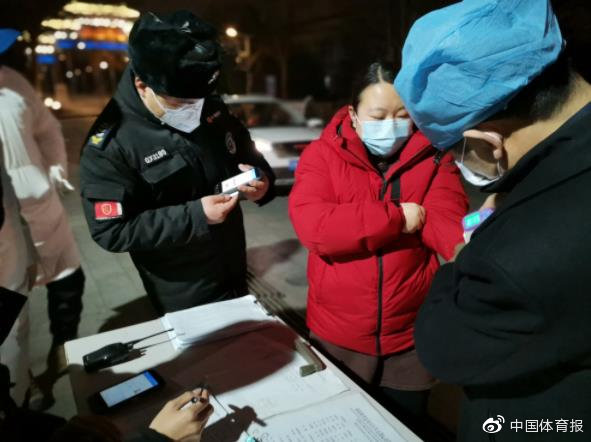 Our university made and released 19 different schemes and notices successively including Work Scheme of BSU for the Prevention and Control of the Pneumonia Epidemic Caused by Infection of COVID-19 and The Notice of the CPC Committee of BSU About the Sufficient Mobilization of Grass-roots Level Party Organizations and Party Members for Making All-out Efforts to Prevent and Control the Pneumonia Epidemic Caused by Infection of COVID-19. The purpose was to ensure the effective implementation of the concrete measures by a smooth work system. The whole university—from the leadership team to the departments and schools---formulated work procedures in strict accordance with the scheme to fulfill the request of prevention and control. The secretary and president of BSU were on duty every day. They held a thematic meeting to arrange and adjust the duty scheme of the leadership team during the winter vacation. All the members of the leadership team of BSU insisted on working on the scene in charge of specific aspects, focusing on the key positions and links. Rigorous investigation was made to spot the hidden danger of epidemic and the system of “one record for one person” was strictly put in place. The health status of all the students and faculty members of BSU was monitored each day. According to the management principle of classification and grading, the teachers and students returning to Beijing or BSU during the winter vacation were quarantined correspondingly. We made the plan for the epidemic prevention and control of foreign student and foreign teachers to help them return to their own countries safely.

Stressing on implementation---Responsibility, workers and strength put in place

Implementation is the key to the effectiveness of the prevention and control efforts. The CPC Committee of the university ordered to eradicate formalism in work and intensify the sense of responsibility. The discipline inspection commission set up a supervision group to oversee the prevention and control focusing on the main affairs and responsibilities. It formulated and issued the Supervision Scheme and carried out the work of supervision and inspection to make sure “where there is prevention and control of the epidemic, there is supervision and inspection”. It facilitated the fulfillment of responsibility and implementation of measures with strict supervision, providing strong disciplinary guarantee for the victory of the war against the epidemic. To ensure the training of national teams, we implemented totally closed management for the two venues and two apartments of the training base of national teams on January 27 and then released the Notice of BSU about Implementing Totally Closed Management for the Training Base of National Teams on January 28. Since January 26, our university further strengthened the gate control during the period of prevention and control of the epidemic. The entrance of outside personnel was strictly controlled; people not belonging to the university were forbidden to enter; the entrance of all faculty members was subject to verification of identity, registration of relevant information and normal body temperature by measurement, thus warding off the risk of importing virus; large-scale aggregation of people like the sporting events, forums and lectures in the whole university were canceled; all the students on campus and student apartments were investigated to enhance the management of accommodation. 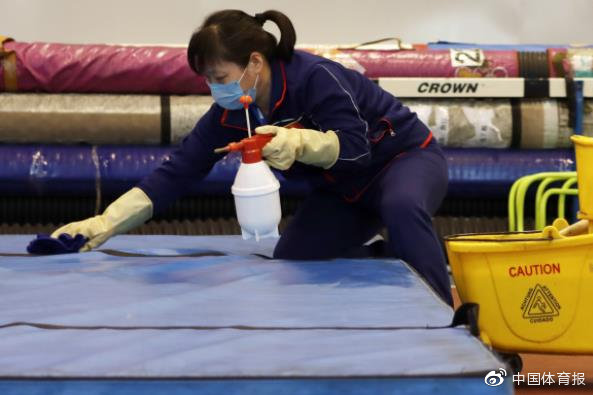 Because it was during the holiday, the university made rearrangement of the personnel based on the fact that there were not enough people on duty in Beijing. The personnel on duty was rearranged according to the requirement of “operating at a lower level”, and the groups led by middle level cadres were assigned to be on duty round-the-clock at the gate. To give play to the role of fighting bastion for the party branch and the vanguard role of Party members, our university made innovation in the work model. We made overall arrangement of three forces—the publicity department of the CPC Committee, BSU media and information network center---to form a temporary party branch of publicity; made overall arrangement of the trade union of the university and retiree office to form a temporary party branch of the family member service area; and set up the pioneering posts for Party members in important positions like the training base of national teams and places for quarantine observation. 57 security guards submitted the written request for assignment, saying they would obey orders and be at the disposal of leaders at any time to become a solid force of the first defending line of our university.

The keyword of “warmth" during this period---let the teachers and students, frontline workers and the whole society feel warm

In prevention and control of the epidemic, the university insisted on the online & offline interaction by releasing the messages like Being United Amid the Epidemic to Overcome Difficulties---A Letter to the Students of BSU, A Letter to All the Faculty Members and A Letter Written by the Alumnus Association to All Alumni successively to convey information and strength to warm the teachers and students. The university set up a thematic website about the prevention and control of the epidemic, releasing the instructions and service notices from higher authorities and reporting on the typical deeds of the teachers and students working at the frontline. It released over 20 pieces of frontline news including Although You Haven’t Come Back, We Are Trying Our Best to Protect You on the Bank of Xiaoqing River and more than 30 pieces of service information altogether, effectively warming people’s heart and boosting their encourage. Such departments as teaching affairs, graduate student affairs, scientific research, and student enrollment & employment rolled out service measures to satisfy the demands of the teachers and students in study, scientific research and thesis writing depending on the “Online Classroom” UMOOCs, "Rain Classroom" intelligent teaching tools and “Classroom of BSU” for online guidance. From January 28, the Psychological Health Education and Counseling Center of our university opened two hot lines for psychological support, aiming to offer the teachers and students as well as alumni professional psychological support. The information network department developed the reporting and checking system for online information, using the Big Data and information-based technology to assist in prevention and control. The logistics department added the electric heater for the security personnel and faculty members, and the cooks in the canteen and building caretakers provide thoughtful services conscientiously.

Besides taking measures to prevent and control the epidemic, the CPC Party Committee of BSU coordinated its publicizing strength, gave play to its advantage and tapped the resources of experts in various disciplines and champions. It offered to strengthen the link with the mainstream media like Guangming Daily, www.people.com.cn, China Sports Daily and Modern Education to set up three columns targeting different demographic groups---“From Professors of BSU”, “Fitness at Home” and “Online Livestreaming”. They published more than 10 articles including Can Bodybuilding Resist the Pneumonia Caused by COVID-19?, How Will You Cope With the Epidemic? Let’s Find out the Answer From Popular Science Experts on Health, A Healthier Diet in Fighting the Epidemic, Expert Suggestions+ Demonstration by Champions---Doing Exercises at Home with Your Kids, World Wushu Champions Teach You to Practice Eight Movements, Professors of BSU Instruct You to Practice Daoyin Health Preservation Exercises, Practice Stretch Band with Popular Science Experts, Famous Artistic Gymnastics Athlete Yu Tao Teaches You to Exercise Scientifically, General Coach Wang Hong of the National Aerobics Intensive Training Team Teaches You to Practice “Lung Building Exercise and Six Movements Alleviating Your Ache During the Holiday. They launched the education of spiritual civilization for specific groups by combining the popularization of knowledge on the prevention and control of the epidemic and the nationwide fitness program/psychological health. This move satisfied the demand of scientific body-building by the common people during the prevention and control of the epidemic, thus offering the wisdom of sports for “scientific prevention and control” and shouldering the social responsibility of a university. BSU did its bit in the victory of the fight against the epidemic. The columns were well received for their abundant contents and active synergy from media. Among them, the page views of Bodybuilding at Home---World Wushu Champions of BSU Teach You to Practice Eight Movements released by the official WeChat account of BSU reached nearly 1 million. This video was reposted by the official Weibo of People's Daily, attracting more than 10 million visits. Several other articles were reposted by mainstream media. The livestreaming hosted by the teachers like Ke Bao, Li Xuemei, Guo Yong and Gao Ling went viral on the Internet, attracting an audience of nearly 60 million. The warmed the public besieged by the epidemic by transforming the energy of sports into a positive energy in our society.

In the people's war against the epidemic, we are not onlookers but guardians and fighters. Under the strong leadership of the CPC Central Committee with comrade Xi Jinping at its core, BSU shouldered its responsibility by taking measures to combine the online/offline efforts, forming a tight network in fighting the epidemic.

Only unity and joint efforts can overcome the great difficulty and embrace the victory.